People
How did the FHS come about? The Story of its Creation through the Eyes of its Founder.

The Faculty of Health Studies celebrated 15 years since its foundation this year. The idea to build a faculty originated in Dr Arnošt Pellant's head during his work in Pardubice Hospital. What was the journey from the first idea to welcoming the first students? Come and read the interview with the first Dean of the FHS.

Do you remember what was happening in your life in May 2007?

Of course, I remember the events of May 2007. Particularly when reading work records and looking at photographs from that time, a number of memories come to mind. It was the time when I became the first Dean of the Faculty of Health Studies.

However, the faculty was preceded by establishing the Institute of Health Studies five years earlier. Why was it founded then?

We have to go back to 1996 when I took the position of the head of the ENT department at Pardubice Hospital with a single fundamental goal. I wanted to prove that my new workplace would be able to match the clinical one in the future. Not only in professional terms but also in the university teaching of ear, nose and throat medicine and in scientific research work, which I lacked very much after I had arrived at the new department.

How did you achieve this?

During one meeting with Jiří Denkstein from the Department of Explosives, Faculty of Chemical Technology, we also discussed whether their graduates shouldn't also have a better knowledge of the effects of explosions on the human body. Also, we talked about ionising radiation, first aid in the case of acid-burning of the swallowing and respiratory tract, and the effects of medication or illegal drugs. In the same year, a three-semester course was added to the curriculum, which was in great demand and was also popular with students from other faculties. I still have the attendance lists from 1998.

So, you could start teaching again.

Not only could I teach again, but also my long-secret wish emerged. Would it be possible for some of the departments of Pardubice Hospital to get the status of a clinical department, similarly to what it is like in university hospitals? The idea was on the table, but it was still too early to implement.

Independently of this, representatives of the then Higher Vocational and Secondary Medical School in Pardubice and the management of the University, and subsequently even the director of Pardubice Hospital, came together to discuss the possibility of establishing a university study that would professionally prepare future general nurses and midwives. All those present agreed with the idea as they were aware of the social importance of university teaching of non-medical health professions and its significance for the development of the University of Pardubice and Pardubice Hospital. Afterwards, I was approached by the rector Miroslav Ludwig to ask if I'd be interested in taking part in leading the preparation of a Bachelor's programme called Nursing and coordinating its teaching.

You accepted this offer.

I did, as I realised that being linked to the University, the hospital in Pardubice could become not only a university basis and medical centre of the whole Pardubice Region, but it would also gain a more advantageous position on a national scale. I found it very important that the hospital could provide facilities for practical teaching and experts for theoretical and practical education. That would also greatly strengthen the idea of establishing clinical departments.

The first study programmes accredited at the Institute of Health Studies were General Nursing and Midwifery. Why these?

Introducing a study programme in any field, you need a sufficient number of students. For this reason, these two crucial programmes of non-medical health care were chosen. In addition, Midwifery continued the long tradition of training midwives in Pardubice, which began in the 1930s, and the later training of certified midwives taught at the Higher School of Health in Pardubice. 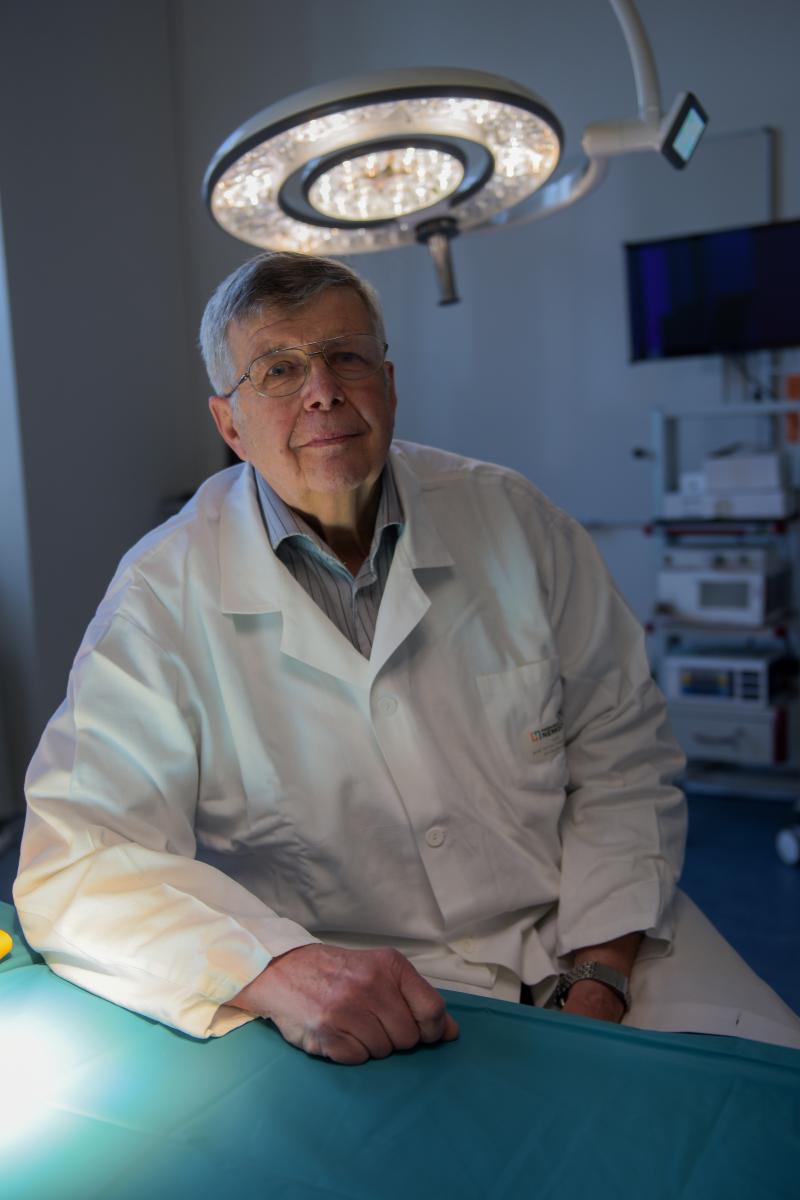 When the first students graduated in 2007, the institute became a faculty. What had to be done to make this happen?

Preparations for the faculty followed immediately after establishing the Institute of Health Studies. I still remember the Vice-Rector Jiří Cakl saying: "… and now, within five years, there could be a faculty." It struck me like a bolt from the blue. The requirement to establish the faculty placed many challenges before us. It was necessary to ensure enough students for the faculty to become independent and economically self-sufficient. We also had to prepare and get accredited in other fields of study and even provide a sufficient number of quality professionals, including habilitated teachers.

Eventually, you also succeeded in setting up clinics within the hospital. These used to be a privilege of university hospitals. Is Pardubice an exception?

When the first three clinics were established in 2002, there were perhaps only two or three exceptions in the country. I don't know the exact figure. However, once our clinics were established, several friends from other universities asked me how we'd done it. At that time, there was only undergraduate medical education at medical faculties. That's why this step was so exceptional. For better understanding, I should explain how a clinic or clinical department differs from an ordinary hospital ward. In addition to providing undergraduate teaching and a medical faculty, a clinic does scientific work, publishes, has foreign contacts, organises conferences and congresses, and has to meet the strict criteria of the ministries of health and education. We fulfilled such conditions without fail, including that medical students from Hradec Králové, who had completed pre-state exam internships in Pardubice, came to practice with us. It was analogous to a relationship between a university hospital and a medical faculty – in our case, between Pardubice Hospital and the Institute, later the Faculty of Health Studies, University of Pardubice. The same status was granted to the Neurology and Obstetrics and Gynaecology Clinics at Pardubice Hospital in 2008. Today, when many universities educate students in non-medical fields and have their Bachelor's, Master's and even PhD programmes accredited, the situation is probably a bit easier. Anyway, there're still an isolated number of non-faculty departments that have been granted clinic status.

This year marks 20 years since establishing the University's Institute of Health Studies and 15 years since the establishment of the faculty. Looking back, how do you assess the development?

In retrospect, I regret to say that the faculty's rapid establishment, development and operation cost the key staff a lot of time and energy, which was to the detriment of their habilitation. It took its toll on the completion of both PhD programmes. In fact, the lack of habilitated staff did not allow the accreditation of new programmes. I firmly believe that older experienced academics and representatives of the younger generation alike will be able to habilitate successfully in the near future. It's undoubtedly true that the establishment of the Institute and later the Faculty of Health Studies, as well as the legislative acknowledgement of the three clinical departments, helped Pardubice Hospital gain importance on a national scale.

Hundreds of students have taken your classes over the years. Do you meet any of them in your professional carrier? How does it feel?

Every teacher is glad when a former student approaches him, especially when the student says that the studies helped him find a job and that he likes to remember his school days. Many of our students end up at rather distant workplaces, so these meetings are not so frequent, but they are all the warmer.

What would you wish for your faculty in the future?

The answer is straightforward. I wish for solidarity and friendly relations of all staff, diligence, perseverance, and interest in the professional growth of all academics.

One of the leading Czech otorhinolaryngologists, he has contributed to the development of the field at the regional, national and international levels. He was one of the first ENT specialists to use ultrasound diagnostics in the throat some 50 years ago. Since 1996, he has been a professor in the field. From 1966, he worked at a department of the Faculty of Medicine, Charles University in Hradec Králové, which he left in 1996 to work at the ENT department of Pardubice Hospital. There, he became a head physician and later the head of the Department of Otorhinolaryngology and Head and Neck Surgery. He boasts 30 years of teaching experience. In 2002, he became the Institute of Health Studies leader, only to become the first Dean of the new Faculty of Health Studies in 2007. He served two terms in the position and is still active on the faculty today.

British Ambassador Discussed Cooperation With the University of Pardubice